Is it odd that I wish I had a very in-depth knowledge of how the inner workings and decision-making in which tv shows aired? I am just seeing some incredibly poor decision making.

I think SciFi appeals to most of us who work in IT. In addition, this crowd (and then some) are among the most wired-in people on the planet. The first to watch tv, the first ones in the theater. Yes…I am talking about those of us that freak out because they feel guilty about missing the midnight showing of opening movies.

Now the big question…why the &^%$ do the networks continue to treat our demographic as if we don’t count.

…and you cancel our shows constantly.

I will be honest, this started for me with a tv show a lot of you probably never heard of called Crusade. It was a spin-off from Babylon 5. One of the most successful Sci-Fi dramas ever that wasn’t shut down because of its popularity, it was shut down because the primary audience watching it didn’t watch anything else from TNT. Tell me that isn’t some seriously ass-backwards thinking.

“Hey we have this INCREDIBLE show that has successfully run for five seasons, had TWO movies run on it. But we have to cancel it…these nutjobs that like this show dont like all of our other (lower-rating / less-popular) programming.”

A few years later…they cancel Firefly why? Because ratings were low and the last dying breath of all Star Trek series was ready to debut and they (Fox) couldn’t find another slot for it. HINT…ALL SCI FI TV SHOWS START OUT WITH LOW RATINGS…THEN IN A YEAR THEY MAGICALLY HAVE 4MILLION VIEWERS PER EPISODE.

Anyhow, I saw a comparison…the productions costs are next to nothing to do reality shows, versus the production costs for sci-fi…even though SANCTUARY was almost 100% cgi…making the funding relatively easy…they got so popular that they got picked up for tv…and then TV shut them down.

I guess my real point is that you guys making all those big decisions should remember a couple things…the biggest sellers of all time are ALL sci fi and fantasy. And that genre’s primary audience and demographic are the very same people you WANT to engage and keep happy. They are the tech head, the geeks, the Engineers, and the Kids that grow into the greatest Imaginations on the planet. Give us some brain food and entertain us. Give us a reason to be loyal viewers, and quit making us feel like you’re still under the sorely mistaken impression the world still thinks the geeks of today are content to only eat what little crap you’re feeding us.

If you want to see a really depressing list…go HERE.

Yes. Tony is a dork. But I am a dork that loves his sci fiction and fantasy…and hates to see good plots get thrown away…

We all look forward to Fridays.

It’s probably because they are Fridays. Let loose, cut loose, grab your friends, check out a new scene, catch a show, gather at a friends, cook out, hit a party…whatever it is you do on the weekend, Friday is what sets the tone.

This Friday has been just a hair outside the norm. There are so many things going on that my eyes got crossed. I have the opportunity to come out and meet a pretty cool twitter friend at a local club. The Stars regular season opener is tonight, in which fektons of friends and tweeps are going. There is a really good band (The Mind Spiders) playing in Denton tonight. This is the last weekend of DTC’s production of Shakespeare’s ‘The Tempest’ at the Wyly Theater. AND, a very awesome little girl named Sydney made me a dragon for my birthday and I have to go visit and accept said gracious gift this evening.

So. I have this HUGE deal about not showing up or being there for kiddos when they are expecting me for something they consider important. Ergo, I am meeting up with my friends and they insanely cool daughter is going to give me my present…(yes, that a photo of the dragon she made me) 😉

Anyhow last week this came up in some conversations and really just makes better sense to me. Who you follow on twitter should be based on interest, not on building reciprocal followers. That said, I’m going to *try* to do this every Friday. I’ll be present a few cool peeps that I follow on Twitter. If it’s going to be called “Follow Friday” I am making sure you know why I recommend them.

@TheRealChes Ches is a geek, a supermom, a great coder, and most importantly she’s got a pretty damn good sense of humor. We been friends for a pretty long time and she’s got a good .02 for you when she sees fit 😉

@MarkRamsey – http://markramsey.com Mark is a buddy back from my college days and is a pretty fun guy to listen to. He’s got tons going on and has two internet shows, in addition to running multiple other businesses and is a great resource for almost anything tech. Check him out!

@Melysa_S – http://sexliesandbacon.com I kind of consider Melysa an authority on snark 😉 She’s a pretty funny and her quest(s) to find the right guy are pretty funny to follow.

So here’s to a great start on the weekend 😉 have a great weekend everyone!

Couple links to start the day.

So I woke up this morning to a couple cool links.

There are some really cool URL autocomplete functions in FireFox. Honestly…I never knew this functionality existed for the about:blank page. It’s kind of cool!
…link sent via @Andria_Stanley
http://www.howtogeek.com/howto/internet/firefox/change-ctrlenter-behavior-in-firefox/

So if you haven’t heard, I am a pretty big fan of Project HoneyPot. This morning I saw in my twitter feed the following link to an imgur pic. Phishing scams are rampant nowadays and if you arent using a good spam filter things can get really messy. However every once in a while, the good guys get one over on the guys trying to steal from all of us.
When phishing scams aren’t well planned, you get the following: 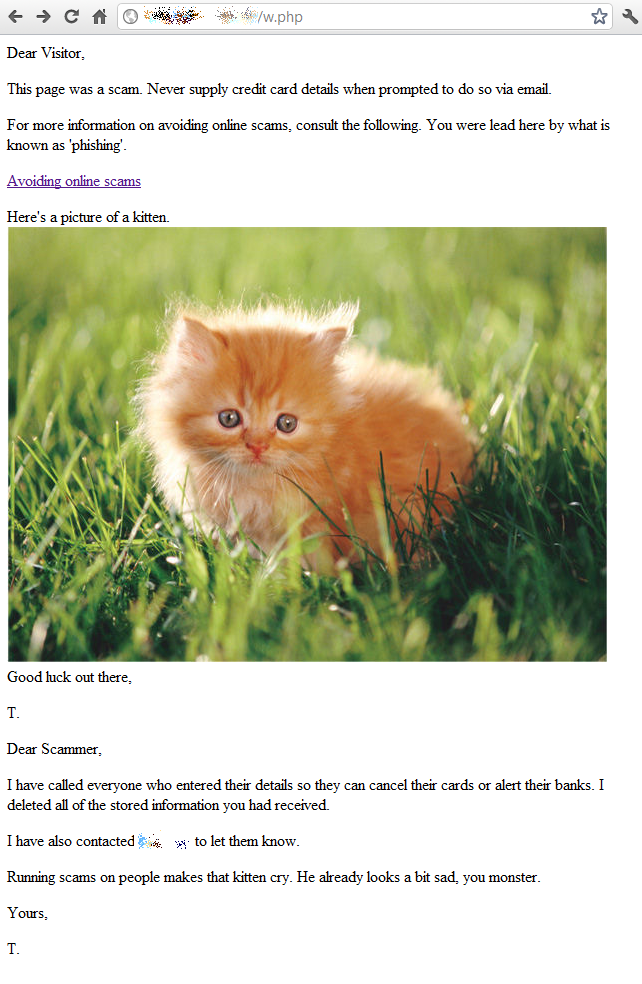